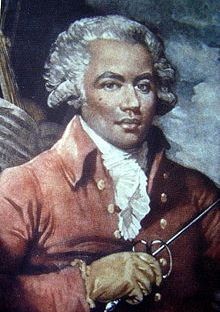 In honor of Black History Month, Ross’ weekly ukulele video series (follow Tiny Village Music or Ross Malcolm Boyd on Facebook to keep up with these) features Ross’ arrangements of musical selections by black composers along with a brief biography.

Joseph Boulogne, le Chevalier de Saint-Georges was a virtuoso violinist, composer and conductor. However, his skills were not limited to music; he was a champion fencer, a colonel of the first all-black regiment in Europe during the French Revolution, and an activist fighting for racial equality in France and England.

Born on December 25, 1745 in Guadeloupe, Joseph was the illegitimate son of plantation owner George Boulogne and Nanon, a teenaged house slave from Senegal. In defiance of the Code Noir, a royal decree defining the conditions of slavery among French colonies, Joseph was treated as a member of George’s family. In 1759, George Boulogne, his wife Elizabeth, Joseph and Nanon moved to Paris. Young Saint-George would go on to receive an education in the art of fencing (under the tutelage of famous swordsman named La Boëssière), literature, science, and music. He held the position of first violin under François-Joseph Gossec’s orchestra Le Concert des Amateurs, later taking the director’s seat when Gossec moved on to a new conducting post. He went on to conduct the first performances of Franz Joseph Haydn’s six “Paris Symphonies” in 1787.

While Saint-George accrued success, his heritage was not something much of French society could look past. Religious leaders (and King Louis XVI himself) opposed the practice of slavery but interracial marriages were illegal and the belief of genetic inferiority of Africans was ever present. Saint-George’s fame was widespread and growing and racial controversy was always close behind. He would form an anti-slavery group called the Société des amis des noirs (Society of the Friends of Black People) to the ire of British slave dealers, prompting an attack by five men with pistols. He would escape without serious injury after fighting them off with a walking-stick (an encounter not unusual throughout his life.)

After Saint-George’s death in 1799, commemorative editions of his music appeared, but his legacy would soon be stifled. Though slavery had been abolished in 1794, it was reimposed under the leadership of Napoleon Bonaparte, who also removed the music of Saint-George from orchestra repertoires. It would be 200 years before there was a significant resurgence of the works of Le Chevalier de Saint-George.

To hear a one-minute excerpt of Ross’ arrangement of Saint-George’s Symphony No. 2 Op. 11 Andante, head over to Facebook!

I'm a music and theater artist & educator, an arts administrator and a blogger. And I love ice cream! View all posts by jamiefeinberg